There is an old and famous saying, “first impressions count”. My first day of sixth form is a day I will never forget. What was birthed, was a persona that I will always hold dear to me.

Before starting sixth form, I knew I wanted to step out of my comfort zone when it came to my fashion. I was tired of the stereotypical “black boy from London” look. I wanted to experiment! Around that time, Matt Smith was the doctor. The one thing I loved about his doctor, was the fact he wore a tweed jacket. His acting was decent, but he just wasn’t David Tennant or Peter Capaldi As well as that, I was taught GCSE English by one of my favourite teachers, who also wore one. So, I said to myself, “I want a tweed jacket”. I mean, why not? I was told by my sixth form, I could wear whatever I want. well within catholic reasoning

So, I said to my mum, that summer of 2013, “Mum! I need some chinos, some shirts, some vans and a tweed jacket!”. If you are wondering, why vans? Well, I wanted to give off a smart casual vibe, but that failed tremendously I even upped the antics, by getting a hi-top that was s-curled. For anyone who does not know the term s-curls, it is a hairstyle. Product is put into the hair, to relax it and make it curl. The hair becomes “soft”, but to get that “soft” hair you have to be ready to endure about 15 minutes of pain

So, my first day of sixth form had arrived. My outfit, grey checked tweed jacket with elbow patches, white shirt, burgundy chinos, black & white vans and black suspenders. As I entered the gates of my sixth form, the response I got was mixed. My friends from secondary school wanted to ditch me. Their response to my outfit, “Where did this all come from?”. and fair play to them Some People thought I was a teacher, who was trying to be “hip”. Others thought, I was just given the wrong dress code. Nevertheless, as the months passed by, I still continued to wear my tweed jacket, and with pride. In addition to that, I kept on experimenting with my wardrobe. From brogues, to tweed waistcoats, to even a tweed overcoat. Over the course of Year 12, my identity grew. It became synonymous with Tweed. The tweed jacket had become iconic. In fact, It was because of this jacket, my nickname in sixth form was “Tweedman”.

If I had to sum up myself at the time; it would be this teenager who was confident, wacky and eccentric. Critics would even argue dickhead as well But, the reason behind all this bravado and braggadocios energy was because I didn’t conform to what was seen as normal and it worked.

So, my question to all of you is this, what makes an icon? The answer is simple, someone who breaks and challenges the current social norms. Someone who dares to dream outside the box, and a good example is Jean-Michel Basquiat.

Basquiat’s first encounter with art, was at the age of 4. His father who was an accountant, always brought back plain paper from his workplace. Fast forward to 1968 and something terrible but in hindsight impactful happens to a young Basquiat. He gets hit by a car, but he survives. In fact, the only “bad” thing that happens to him, is the removal of his spleen. While recovering in the hospital, his mother gives him the book, “Gray’s Anatomy”. Her intentions, to simply expand Basquiat’s knowledge on the human body. But little does she know; this book will go on to play a recurring role in Basquiat’s life. 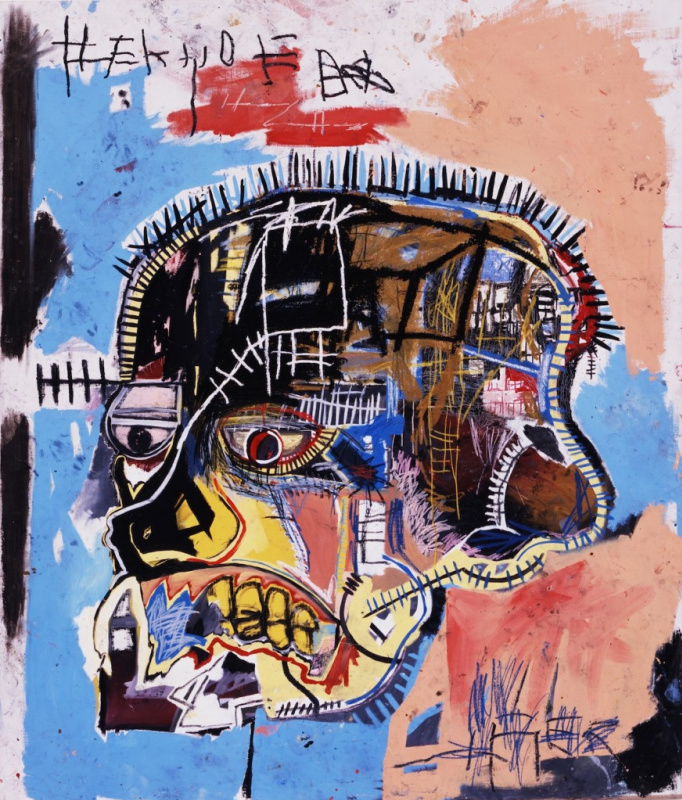 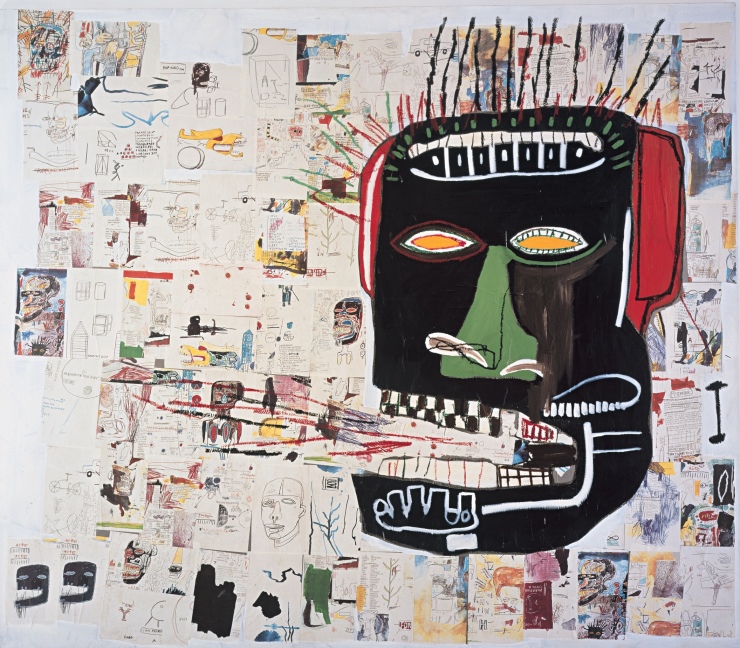 We are now in 1976, Basquiat is in his teens. He is in high school and encounters a local graffiti artist, Al Diaz. The two become close friends and they form the famous duo, SAMO. With the meaning “Same Old Shit”. SAMO is a fictional character, who sells a fake religion.

What makes SAMO such a cultural phenomenon in New York, is that it does the opposite to graffiti. The purpose of SAMO, isn’t to deface a building or to mark a territory. SAMO’s  main intention, is to ask philosophical questions. Stir up a conversation, on life itself.

1978 and Basquiat leaves his home for good. His intentions, fame. In order to keep his dream alive, he begins selling hand painted postcards and T-shirts. He even strikes gold and successfully sells his work to Andy Warhol his name will crop up again, in a restaurant.

By 1979, SAMO is now an urban legend. After having several disagreements, the duo part ways. However, instead of burying SAMO, Basquiat cleverly uses his initiative and spray paints “SAMO is dead” around New York. And, it does not stop there!

April 1979, a 19 year old Basquiat is beaming with excitement and he spray paints SAMO artwork, live on TV at the canal zone. In terms of timing, Basquiat got this one spot on The canal zone was a massive hub for New York’s graffiti artist. The good news does not stop there. Days after, he forms a band called “Gray”. remember what I said about that book and it’s “recurring role” Basquiat plays both the clarinet and synthesizer. Did he have any experience playing the two? Nope. Not. At. All.

June 1980, Basquiat has his art exhibited for the first time at “Times Square Show” and it is received positively. He then goes on to make a film called downtown 81, which is loosely based on him. Using the money gained, he buys canvases and art supplies. As basic as these are, you have to bear in mind Basquiat was not living an extravagant life. He didn’t do a “9 to 5”, in fact he detested the idea At this point, Basquiat is fully committed to art. From doors to tyres and even windows, he is making art from anything.

1981, Basquiat exhibits his art at P.S.1, and again it is received positively. It is from here, he meets Annina Nosei, who gives him a studio. Basquiat is grateful for this opportunity. It is around this time, Basquiat travels around Europe and exhibit his art.

But by 1982, Basquiat finally makes that transition. He has his first solo exhibition and it is more than a success. Everything is sold, he makes about $200,000. His progress now is exponential! 1983, Basquiat becomes a millionaire, his paintings are going for $30,000. Piles of money are lying around his studio. Fun fact: Basquiat did not have a bank account at this point

Lucrative opportunities are being presented to him, he is now modelling for brands such as Comme des Garçons. He even has an affair with Madonna During that year, a friendship with Andy Warhol blossoms too. the two are literally inseparable However, even with all this success, Basquiat is in a strange place. He is not fully accepted by the art establishment, and he knows it. Basquiat could sense that simply being a black man, played a part in all of this. When it came to his race, Basquiat never shied away from including it in his art. For example, the piece “Hollywood Africans” (painted 1983), he writes the word “gangsterism” which at the time and even to this day is synonymous with black males. “Sugar cane” and “Tobacco” are written too, words which are linked to the slave trade. 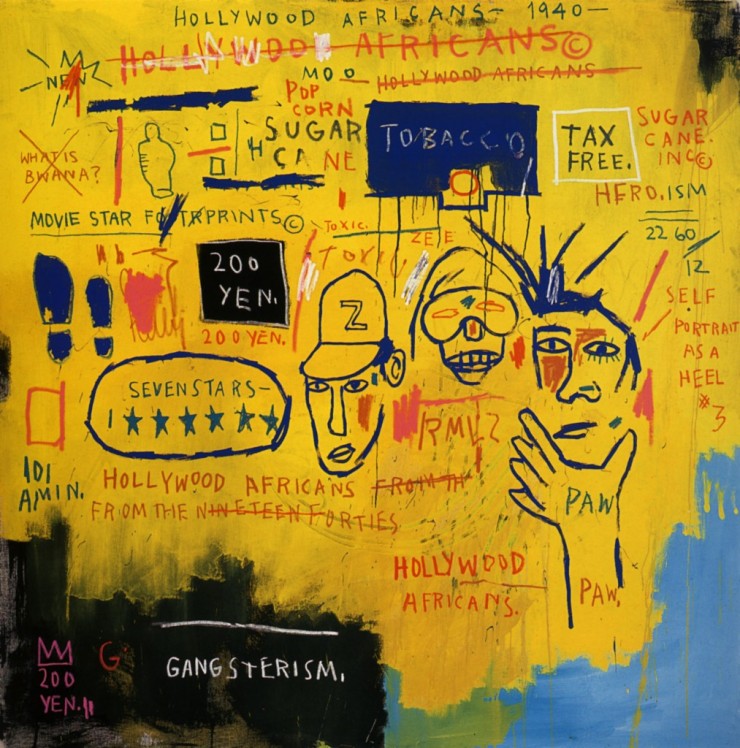 1984 and Basquiat’s art still continues to sell at a considerable price. However, he develops an excessive drug addiction and his friends become concerned. who could blame them The artist, is in a constant state of paranoia. Fearful of people stealing his work, Basquiat starts destroying his own work. His health deteriorates as well.

September 1985, Basquiat and Warhol have their biggest joint exhibition. They go all out to hype up the event. Posters of them in boxing attire are advertised everywhere. But it is not a success. This leads to Basquiat feeling depressed and dejected. His relationship between Warhol begins to crumble, due to the failure of the exhibition.

February 22nd 1987, Andy Warhol dies. The news leaves Basquiat shell shocked. Basquiat pays tribute to his late friend with the piece “Gravestone” (painted 1987), the words “perishable” are crossed out. One door is covered with a cross, symbolising a tombstone. Next to the cross, is a flower. The significance of the flower is to show signs of respect, when a person visits a beloved’s grave, they leave flowers. 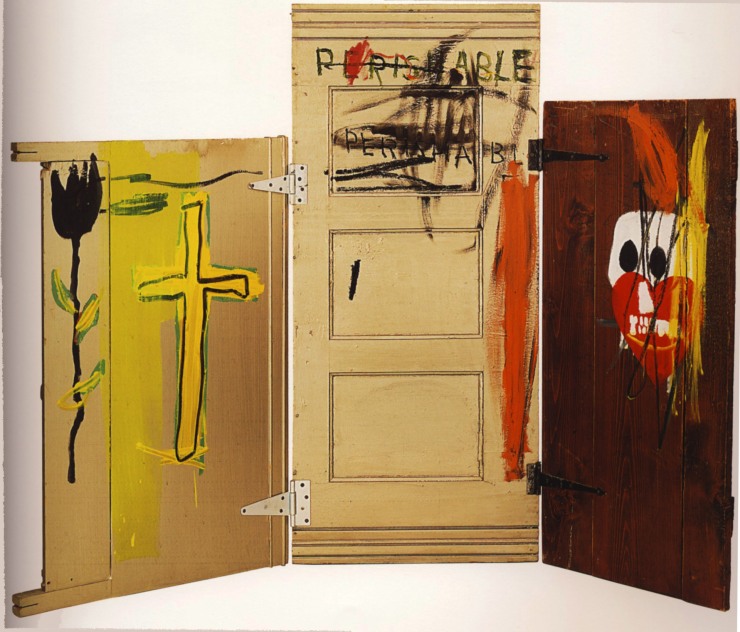 1988 and Basquiat is back in New York. A considerable amount of time has passed since he has done a solo exhibition. Unwillingness clutches Basquiat firmly. He is fearful of how his work will be received. But the people around Basquiat, persuade him to have the exhibition. To his own surprise, the work is met with positivity.

In my opinion, this particular work has a different energy. It is more spacious and simplified; Basquiat is delving into the subject of death. For instance, “Riding with death” (painted 1988) and “Eroica I” (painted 1988). Riding with death, a human is riding the skeleton of what looks like a horse. In Eroica I, the words “Man dies” are repeated and are not crossed out. It’s as if Basquiat is saying his own career is coming to an end. Or even worse, his own life. 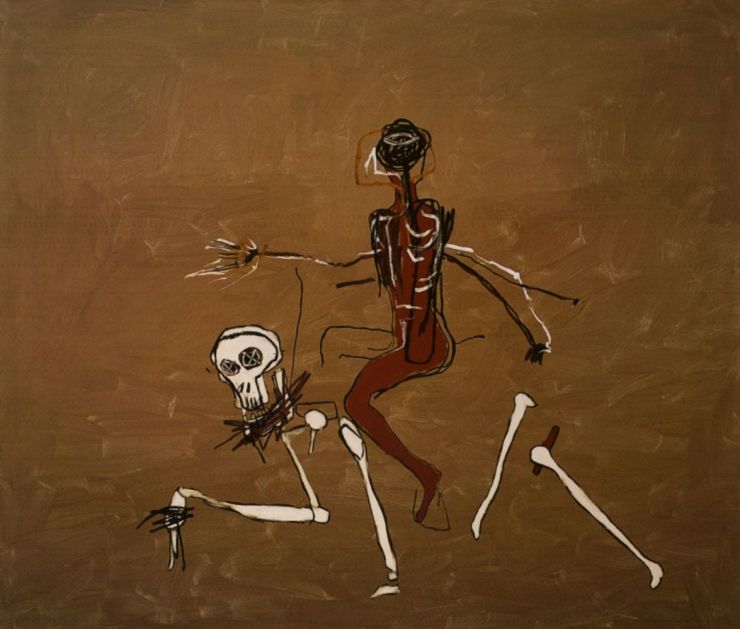 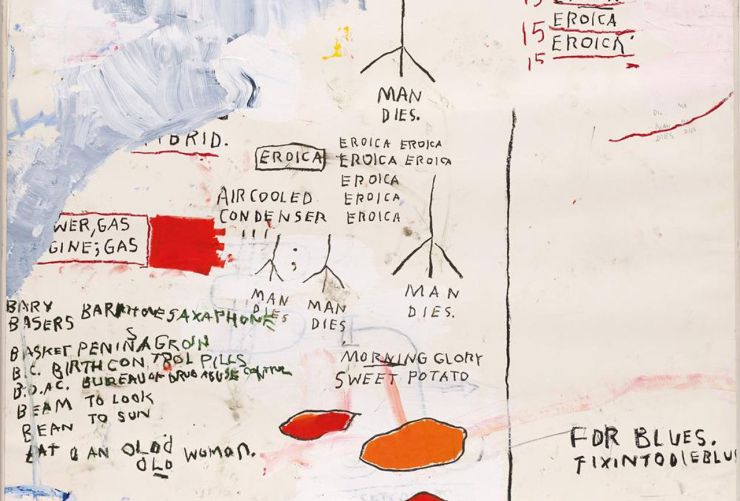 Even with all the success from the exhibition, Basquiat was still in turbulent times. He was battling his drug addiction and refused rehab. His friendship circle became damaged. It is only loneliness that is Basquiat’s friend.

He retreats to Hawaii for a short period. By late June, he returns to New York with a new lease of life. An ecstatic Basquiat, proclaims to friends and family he is free from drugs. However, his addiction returns and he dies, August 12th 1988. The autopsy is not pleasant, it reveals that he died from drug intoxication by opiates and cocaine.

If we look at the life of Basquiat, he was a man who was ambitiously driven. Well spoken and delivered his words with a soft tone. Basquiat knew from an early age, he wanted to be famous. He despised the feeling of failure. Basquiat was so focused on being famous. At the age of 17, he took to the streets with little money. He stated in an interview, “I was living from place to place, eating cheese doddles”.

Basquiat was an intellect, he read books about African art such as the “Flesh if the Spirit”, studied the work of Charles Darwin, read books by Mark Twain. He adored the work of artists before him, from Leonardo Da Vinci to Picasso to Vincent Van Gogh.

With regards to his art, Basquiat always had the tendency to cross out words, this was always intentional. His answer for this, “I cross out words, so you will see them more. The fact that they are obscured makes you want to read them”.

All in all, Basquiat was an individual who was never subdued by the shackles of society. Some art historians refer to him as the “Black Picasso”, but bullshit to that. Excuse my language

Last year October, I went to a Basquiat exhibition at the barbican. The title of the exhibition was called “Basquiat: Boom for Real” and it is definitely a fitting title. As much as I adore Picasso, Basquiat did something that Picasso could never do. Produced deliberate enigmas and depicted his own thinking on a canvas.