Firstly, Merry Christmas everyone! now that we have all the formalities out of the way, time to crack on

So, for anyone who doesn’t know me. I hardly take myself seriously, for the past three memoirs I have always delved into something personal. But for this one, let’s have some fun. I have an anecdote this time.

So hats, hats are a very trendy accessory. They are the icing on the cake for some outfits. Emphasis on the word “some”, if you are planning on wearing a three-piece suit. I personally would not recommend wearing one Every black boy knows, if your haircut is not great. Slap on a hat and boom! Back in business.

When I was growing up, I hated hats. I personally think it is due to having a big head However now. I don’t mind them. If you enter my room, you will see a baseball cap that says “Chard” in Japanese. But before I purchased that hat. I wanted to always have a bowler hat. During sixth form, I was deeply fascinated by them. They just had a “Je Ne Sais Quoi”

I remember flirting with the idea of purchasing one, “Do I buy one or not?”. There were evenings, I would scroll through the internet in search of one. But I never summoned up the courage to purchase one. Why? It was just an overly audacious move, I wore a tweed jacket to sixth form. Couple that with a bowler hat, no thanks.

I even remember telling my friends about purchasing a bowler hat and they all shutdown the idea. The responses were “Richard you can’t be serious?” and “Richard! What the hell inspired you?”.

So here I am 2018 Christmas Day, no Doctor Who Christmas Special and most importantly no bowler hat. Maybe the two will change 2019, who knows? But, let’s cut to the chase. An artist who effortlessly incorporated the bowler hat into his art, was René Magritte.

Born in Belgium, November 21st 1898, to Leopold Magritte and Regina Magritte. René Magritte had a moderately good childhood, he learnt his craft from age 12. However, he faced anguish during his teens. At age 14, his mother took her own life. She drowned herself in a river. To add to that, this was not her first attempt. In fact, the woman attempted suicide multiple times. The family was shunned and shamed for this. They could not face the daily torment. So 1913, the family decided to move to Paris.

1915, Magritte creates his first pieces of work and they have an impressionistic style *cough* *cough* that was probably due to Claude Monet

1916, The Teenager attends the Académie Royale des Beaux-Arts in Brussels. He stays there for two years and leaves. His reason, he thought it was a waste of time. The young artist did not feel challenged and fair play to him. After he left the institution, He started to focus more on cubism and futurism.

1922, Magritte marries his childhood sweetheart Georgette Berger. Whilst married, he earns a living by designing posters.  1923 and the newly wedded Magritte strikes gold. He is able to sell his first piece. He keeps painting and by 1926, secures a contract in a Belgium gallery. It is at this point, Magritte is truly a full-time artist.

1927 and René returns to Paris. While in Paris, he starts to delve into the concept of surrealism. His art is going through a regeneration Doctor Who reference there and it regenerates into something that is a mixture of abstract and surrealism.

Now, what is surrealism? Well it was a movement well started as a movement. Surrealism was more than just a period of art. The goal of the movement was to promote the freedom of expression, both socially and politically. It wanted to challenge the ideals upheld by the elites. It existed to question the established traditions, in Paris especially. Surrealist were even influenced by famous psychologist Sigmund Freud. To be a surrealist, you had to tap into your unconscious mind and bring it to the forefront of your work and attitude. These ideas were innovative for the times; especially after World War 1.Surrealism definitely drew inspiration from non-western art. But it did so to question both imperialism and colonialism.

After encountering French writer and poet, André Breton. Magritte developed his own surrealistic style. So those bowler hats, pipes and apples. On a side note, André Breton was a big name in surrealism. He was one of the founding members.

With all the knowledge Magritte amassed. The artist returned to his home country in 1927 and held his first exhibition. Although he showed 61 pieces, the exhibition was a disaster.A defeated Magritte left Belgium and returned to Paris.

During his time in Paris, he continued to focus on his art. He produced pieces such as The Lovers (painted 1928) and The Treachery of Images (painted 1929). “The Lovers” in my opinion, delves into a scientific idea. Just roll with me We can see two people trying to kiss each other but are separated by cloths. However on the contrary, what if I told you by removing those cloths and allowing them to kiss, they are still not touching each other. Again, just roll with me From secondary school, we are all taught that we consist of atoms.Those atoms are made up of electrons, protons and neutrons and for those of us who did A level physics or even have degree or PhD in physics or chemistry will know protons and neutrons are made from quarks Well, when those atoms interact with each other, in particular the ones that are not going to react. There is this electromagnetic repulsion, the electrons are repelling each other. It is the way our own atoms interact with this force that we call this human experience “touching”. So on a subatomic scale, they are not even “touching” the cloth. So if they were allowed to kiss, they are still not touching each other.

“The Treachery of Images”, this piece has a philosophical argument. The pieces states in French “it’s not a pipe” and Magritte is right. It is not a pipe, it is a picture of a pipe. For example, if I showed you a picture of baby me. Could you truly say that is me? You only know that it is me by associating that baby with the information you have from present me. Does the baby know calculus? Or who Pablo Picasso is? Nope and Nope. My point is, that picture of me does not encapsulate present me, so how can it be me. This same argument can be applied to “The Treachery of Images”.

1929 and Magritte’s career takes a massive blow, the gallery he works for is closed down. This has a catastrophic effect on his income, it becomes erratic.

This is fine for a while. Moreover, with the outbreak of World War 2. Panic breaks loose over Europe and Nazi Germany seizes control of Belgium. Magritte decides to stay in Belgium and this confuses André Breton. It is because of this decision, the two-part ways.

With World War 2 in full swing and Magritte returns to impressionism. I don’t blame Magritte, Nazi Germany all over your tail. Being a surrealist, no thank you. This does not last for long. Magritte adopted a new day job, making counterfeits art. Even with World War 2 over, things got even worse and Magritte started making fake money. However, this lifestyle of fake goods eventually came to an end.

Once Magritte’s financial situation improved he went back to surrealism for good. He would continue with this style of art until his death on 15th August 1967. The cause of René Magritte’s death, pancreatic cancer. Quick side note: from the day he married Georgette Berger, René and Georgette stayed together to his death.

If we look at Magritte’s life as a whole, it can be concluded that he was an artist trying to find his niche. He adopted different styles, but when he finally found surrealism. He entered into a groove and just propelled himself upwards.

His art questioned how the natural world was perceived. For example, The Clairvoyance (painted 1936) and The Mysteries of the Horizon (painted 1955). It’s pieces like these that as the viewer, you find beautifully annoying. Since, the pieces make sense and do not make sense at the same time. It’s simple yet complex. 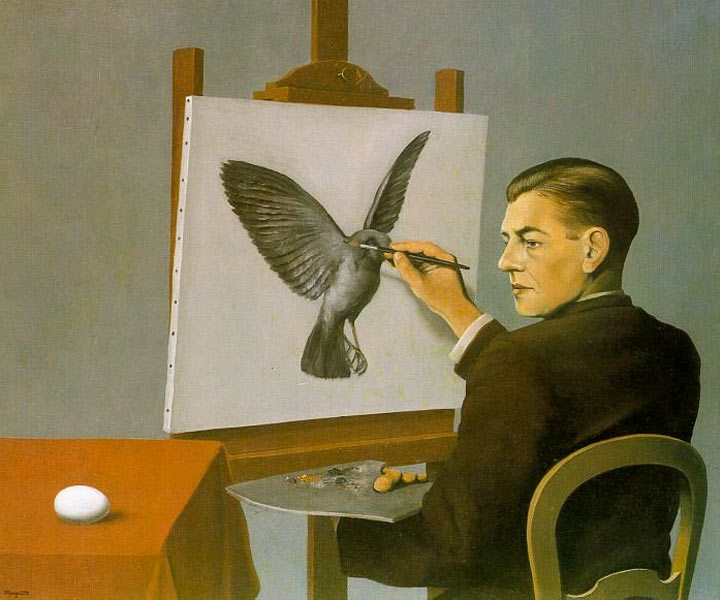 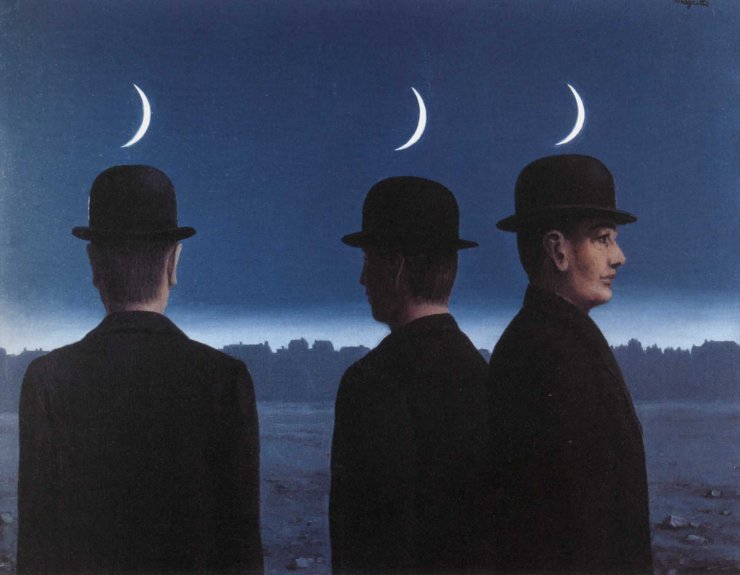 Even with The Art of Conversation (painted 1963), I see it as two Individuals who are having a conversation. They are so focused. That they forget that time is just flying by and hence why they are in the sky.

Did he regret the counterfeits? Yes, He absolutely did. But you have to empathise with the artist. When life gives you a cocktail of fear and pressure to drink. You can do the most outrageous acts.

All in all, Magritte was an individual who studied diligently and knew what surrealism was about. René Magritte once said, “The mind loves the unknown. It loves images whose meaning is unknown, since the meaning of the mind itself is unknown”. The man who sauntered the streets of Europe in his overcoat and bowler hat; had unlocked his unconscious mind and brought it to life on a canvas.